Last Friday, I wanted to blow off some steam. It had been an exhausting past couple of weeks: the start of a new relationship, the ending of said relationship two weeks later, busy season at work starting up, hanging out with friends. What I wanted to do was go out and get stupid drunk. What I ended up doing was going to a friend’s birthday party at You Do the Dishes and almost getting stupid drunk on accident.
For those of you not in the know, You Do the Dishes is a paint-your-own-pottery studio. It’s a great place to get together with friends and bond over your shared creativity–or lack thereof. It’s also a fun place to celebrate your birthday, and you can bring your own wine and snacks. I’m no arteest, but I will paint a coffee mug if I can drink while doing it. (I’ll also paint a canvas if drinking is involved.) The invite for the party said to bring a bottle of wine and/or a snack to share. Since I had eaten a few hours before, I wasn’t hungry, so I picked up a bottle of sweet red and figured I’d Deebo a snack or two when I got there.

When I arrived at the studio and found the party, I saw the refreshment table. On it was a shit-load of wine…and a box of cupcakes. Perfect. I set my wine down, socialized, found a coffee mug to paint, and then helped myself to a party cup of the sweet red I brought. As a reminder, this is what party cups look like: 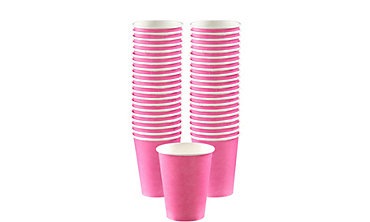 They really are not that much bigger than Dixie cups. I began to paint my mug, finished my wine, then went for some more. I still was not hungry, but apparently my early dinner had digested enough to where I had the ability to get shit-faced off very little wine, because at the end of my second cup, my head was spinning. I also felt flushed.

I was tipsy off two party cups of wine at You Do the Dishes. I began to have an internal panic attack. Did anybody notice? How long would it take for me to sober up? Was my speech slurred? Did this make me an alcoholic? But most importantly: How does this even happen? You Do the Dishes is a respectable place for respectable people to go and paint pottery and drink coffee and be respectable, not a place for people to drink it up like thirsting travelers in the Sahara. And on two party cups of sweet red. I felt like I had reached a new low in my life. I was also sitting across from my friend’s sixteen year-old daughter, and God forbid I came across as that friend, the drunken Jezebel you warn your kids not to turn into when they grow up.

I shut up, made sure not to go for a third cup of wine, ducked my head, and threw all my concentration into painting my mug, praying that we’d bust into the cupcakes sooner rather than later. I needed something to soak up the alcohol.

A few minutes later, I heard those magical words: “Cupcake time!” Yessssss. A big, frosting-y, sugary treat was just what I needed to counteract the two party cups of  Devil’s Juice I had just consumed. The box was opened, the cupcakes were dished out–and they were bite-sized.

I had two more.

Now I was not only a drunken Jezebel, I was the greedy drunken Jezebel who helped herself to three damn cupcakes before some people had had one. The shame I was beginning to feel after getting tipsy was compounded by my gluttony and the number I was doing on my coffee mug. My mug had paint streaks. The frosting on my fingers and coloring my tongue made me unclean, a leper. And I was still tipsy. I didn’t deserve to darken the doorway of You Do the Dishes ever again.

The only thing left to do was wait it out. I took my time and focused on painting my mug, taking solace in the fact that nobody else was even remotely done with their pieces. And by the time we left at ten, I was sober, my dignity somewhat in tact because nobody even caught on to my internal struggle and personal turmoil a few short hours prior.

It was a good night.

As for my coffee mug? Well, let’s just say I fared better than it did.

P.S. Did you know I’m on the Facebook now? Well, hang on to your hats, playas, because I am! Like my page, will ya? And maybe tell your friends about me?