Last Friday, a friend of mine got a group of us together to watch It’s a Wonderful Life at Tampa Theatre as part of her annual Christmas tradition. Before the movie, we were led in a Christmas sing-along in which songs such as, “White Christmas” and, “Deck the Halls” were featured.

While singing these timeless classics was fun, and did a great job of getting us into the Christmas spirit, it got me thinking: for every classic Christmas song, there are some that are creepy, or just downright stupid.  Songs that, when they come on the radio, cause you to wrinkle up your forehead and mutter, “What in the actual fuck am I listening to?!” I present a sampling of some such songs:

At first, it sounds like a delightfully charming ditty about a woman who pays a visit to a suitor, and then has to go when it starts to get late, because that is what people did back in the 1940s when this song was written. A woman just didn’t stay over at a man’s place back in those days unless she was a) married, or b) a ho. So the woman is trying to politely bid adieu and get the fuck out of there with her reputation in tact, but her suitor is begging her to stay. Cute, right? Until this line:

The neighbors might think (Baby, it’s bad out there)
Say what’s in this drink? (No cabs to be had out there)

Um, what?! Did he slip something in her drink? This moment takes the song from cutesy and fun to icky and uncomfortable, as it sounds like he gave her a gin and tonic with a side of rohypnol. Yum! Just what every woman wants for Christmas.

Believe it or not, Idina Menzel and Michael Bublé have made what is perhaps the creepiest version of this song. Throughout its entirety, the singers add in their own little quips between lyrics, but Bublé drives that train straight into the Rapeville Station after Menzel says, “You’re very pushy you know” and he responds, “I like to think of it as opportunistic.”

What?! What?! I’m not sure which is worse, that line, or the fact that it’s delivered by this face: 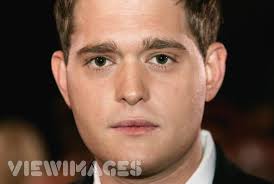 Girl. You’re a golddigger. And I know that keeping your legs closed is a major accomplishment for you, but thousands of respectable women manage to do that every day and they’re not asking for a Christmas tree with Tiffany decorations. AND you want Santa to put a ring on it after you’ve (probably) let him get some of that ass? No. He goes home to Mrs. Claus. You’re a side piece. Get your life. Pay Michael Bublé a visit.

Grandma Got Run Over by a Reindeer

This song isn’t really creepy so much as I hate it and want to slap Elmo and Patsy in their stupid faces every time it comes on the radio. It’s just asinine. If Grandma is stupid enough to wander through the woods late at night (because Santa doesn’t pay visits at, like, eight o’ clock in the evening), then she deserves to get her ass run over. And where is Grandpa in all of this? Cooling his jets at the house with a smoke? Matter of fact, why is Santa’s night vision so poor where he would run over an old woman with his reindeer? So many unanswered questions.

Don’t even get me started on such gems as, “All I Want for Christmas is my Two Front Teeth,” and, “I Want a Hippopotamus for Christmas.” It’s late, and I need to come down from the rage spiral I went into from writing about the three songs mentioned here. I just hope that whatever you listen to this holiday season gets you in the holiday spirit with minimal damage to your psyche. Merry Christmas!